And the way I am interested in capturing it - a Magical way. 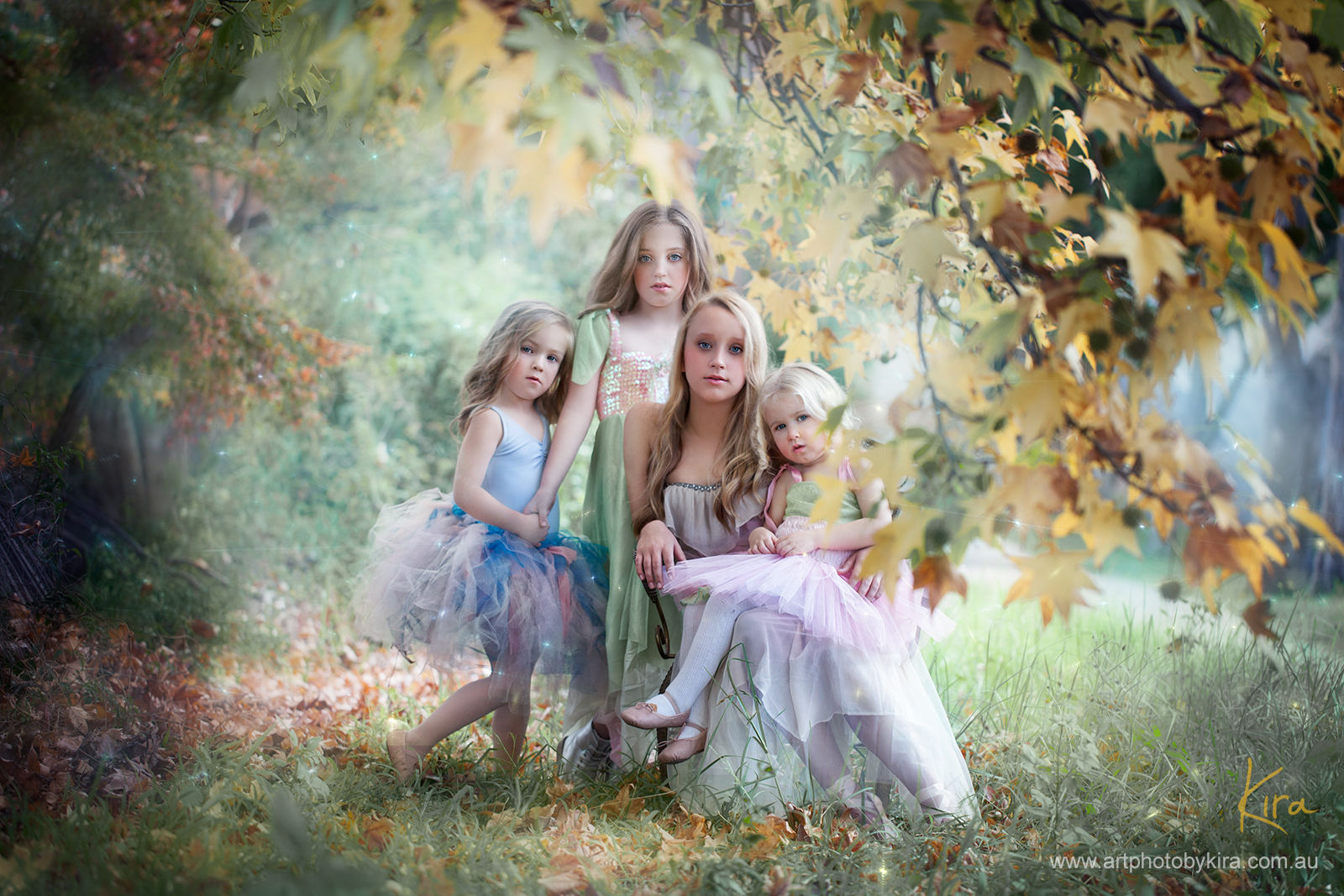 Here is one of  the images that you were asking me about.

As soon as I posted this image on Facebook and in a few groups - I had a lot of people asking how it was created. I am even considering recording a video tutorial for you all to show all my steps in details, but for now, I thought, I can quickly describe the process of creating this image in this blog.

Since this blog was posted - Fall Gardens Video Tutorial was released for those who want to see actual steps I was taking in Photoshop. See full processing and download the image to play with here: Fall Gardens Tutorial 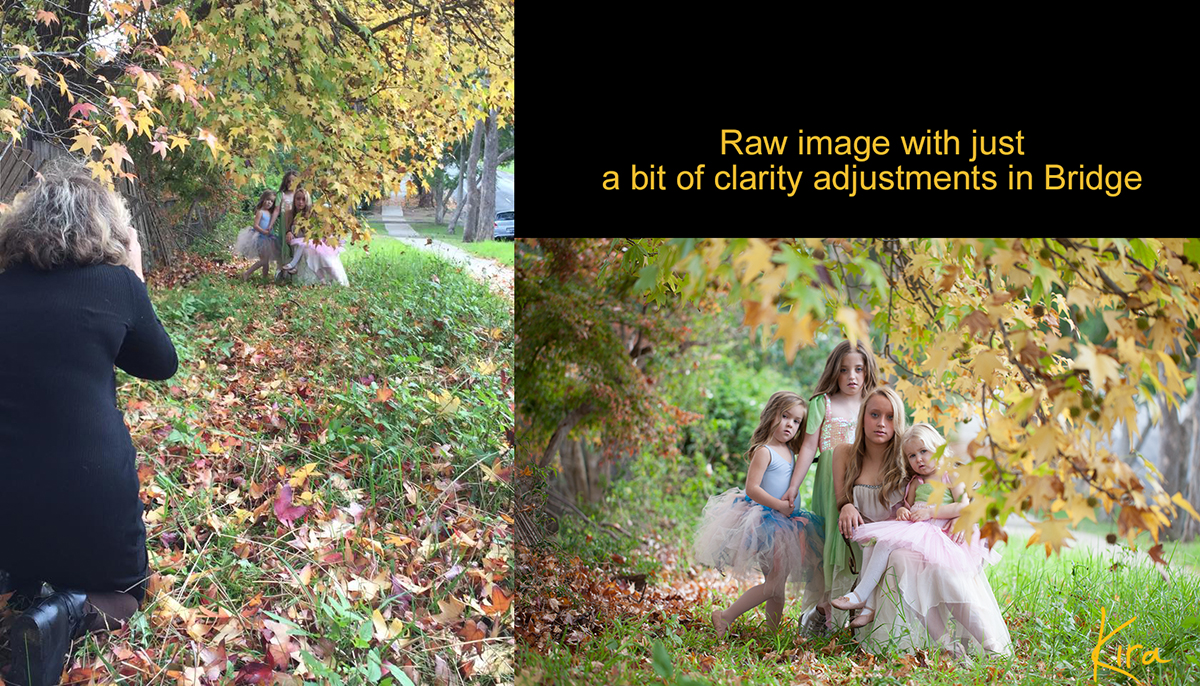 First of all – here is behind the scenes image taken my one of the Mums. It shows where I was shooting, at what angle. That was just a dirty road next to the studio. I was after a spot for the girls where the light would be soft and even. Also it was in the morning – so again – soft light.

Then you can see RAW image from camera.

After a few pimples and red spots deleted here and there and a bit of cloning an odd branch I did just a bit of softening of their skin with one of my actions  - Satin Skin Light from Photo Rejuvenation Basic Retouch Workflow Actions. You can do it yourself in Photoshop with cloning on low opacity in circular motions, but it will take a bit of time - not much though as kid's normally have a good skin already.

Then I started a bit of my painting process on their faces and bodies, thinking about creating a bit of 3D effect with the Light - sometimes I do it with my actions when I am in a rush (check Light and Shadow from Photo Rejuvenation Basic Retouch Workflow Actions), sometimes I just grab white or black brush and paint on a separate layer, filled with 50% grey on overlay mode. Basically the goal is the same as what makeup artists try to create - sculpture with the Light, bringing some features forward by painting with white and having some shadows for receding by painting with black.

Then I start to play with layers – curves and levels. Lighting the areas I want to light - in this case – more around the girls to create the illusion they are surrounded by light and haze. Then darkening the image where I want to have a bit of vignette.

Then I play with selective colours, replace colours and colour balance to add tones and hues that I want. It is different every time, depending on the feel of the image for me. For example – in this image, for me -  greens were too strong so I desaturated greens with a “replace colour”.

I added some blue tones on the areas that are going backwards and added a bit of warmth to the areas that are supposed to come forward – girls and areas around them, couple of leaves here and there. I always think from a painting prospective – if you want something to come forward – brighter and warmer colours, if you want something to recede – pick cooler colours.

Same goes with sharpening and contrast. I play with curves and sharpening for the eyes (you can use "Add Drama to Your Eyes" and "Boost and Brighten Eye Drops" from Photo Rejuvenation Basic Retouch Workflow Actions  if you want to speed up the process or just do it manually with Curves, Shadows/Highlights or Painting with White and Black brush on a separate layer filled with 50% Grey and then also can use a Sharpen Filter - I use Unsharp Mask for this)

I wanted some features and details on the girls to come forward with more contrast, warmer colours and sharper details and also wanted to put more haze and less contrast on the areas I don’t want to focus on.

Sometimes I use my actions for pop or 3d effects to speed up the process. Check "Radiance and Vitality" Action and "Deep Details Extraction" Action from Specialised Treatments Photoshop Actions

That is also why I prefer to shoot on F2.8 even when I have 4 girls as in this case. Shallow depth of field gives me that beautiful bokeh around them that I absolutely adore. I just need to make sure all 4 are on the same focal plane. And, just in case one will be less in focus than another, I sometimes take a few more shots, focusing on each of the girls so, if needed, I can even swap heads. That is how much I adore shooting on F2.0 or F2.8  🙂 I am always after a magical feel and that is what those apertures give me.

I see the light in F2 or F2.8  LOL.   I understand that some people will be shocked as that is going against the rule when shooting a few people, 😉 but that is how I prefer to shoot. When I don’t have time (like on a wedding day or when you shoot a family photography and have only one hour for all the variations of the family group – then I will change the F stop to 4-5.6 and then will have to add some blur in post around people if needed.

But I digressed. 😉  In my next steps for this image, I painted the areas I wanted with a bit of a cream colour on separate layers – on a low opacity. A few times, every time on a separate later: sometimes on a normal blending mode, sometimes on a overlay or soft light mode, including girl’s skin and around them to create more creamy and hazy effect.

And, at the end, I used Magic light Overlays for some sparkles.

Hope you enjoyed reading this and got some creative ideas for your future photoshop and post-processing. If you did - please share this blog with your friends.

Would you like to have this explained as a video tutorial? Let me know in the comments below.

Love to all. Kira

Since this blog was posted - Fall Gardens Tutorial was released for those who want to see me actually processing this image. Get your copy and download the image to play with here: